Echinacea might be an effective remedy for nipping a cold in the bud. Want to make your own echinacea tincture recipe? Read on….

Echinacea is one of the most popular herbal remedies. In fact, according to the American Botanical Council, echinacea is the third top-selling herbal dietary supplement. Not bad, considering U.S. consumers spent over $7 billion on herbal supplements in 2016. [SOURCE]

And that’s not even counting the multi-herb formulas containing echinacea. As a single herb, echinacea accounts for five percent of total herbal remedies and supplements worldwide.

Echinacea tinctures are an easy way to reap the supposed immune-boosting benefits of this popular herb. But can an echinacea supplement really boost your immune system and neutralize a cold? Does it matter what kind of is used? And are the health benefits of echinacea, including its ability to fight colds proven?

Can echinacea beat a cold?

Without doubt, there’s tons of anecdotal evidence that says yes. Just look at any echinacea product page online. You’ll likely see customer reviews like this one:

“I have been using this product for my kids. They don’t get sick that often as before.”

Clearly, lots of people are sold on echinacea.

However, you’re not going to find any research studies that prove an echinacea tincture can prevent or cure a cold.

Here’s what one study says about echinacea:

“Unfortunately, most of the ‘evidence’ for … Echinacea has been anecdotal. Moreover, to this day, there is no formal proof on how to achieve the best results—whether it should be consumed daily throughout life as a [preventative]; consumed by either young or old; or consumed after diseases, such as cancer, have taken hold.”

And here are a couple more research findings that cast doubt on echinacea effectiveness:

“Taking echinacea after you catch a cold has not been shown to shorten the time that you’ll be sick.”

“Taking echinacea while you’re well may slightly reduce your chances of catching a cold. However, the evidence on this point isn’t completely certain.”

These comments above at least offer some hope that echinacea might work. But other study conclusions like this one, are not so kind:

“Echinacea products have not here been shown to provide benefits for treating colds….”

Is Echinacea a placebo?

In light of the dubious findings, does that mean taking echinacea drops is no better than swallowing a sugar pill?

There is scientific proof that echinacea enhances the immune system. Thus, if you’re looking for scientific validation that making your own echinacea tincture recipe isn’t a waste of your time and money, you seem to be in luck.

Let’s take a look at what some of the research that supports echinacea says….

Using echinacea for immunity seems to be supported by this study. Although the study subjects are mice, it does show promising results. The researchers say daily consumption of echinacea is indeed preventative. Moreover, it extends the lifespan of aging mice. It even significantly diminishes the effects of leukemia.

Skeptical about echinacea tincture uses for health? Especially because the study was done on mice? Well, consider humans are 97% genetically related to mice. In fact, we have so much in common with these squeaky rodents. The researchers say basic human physiology is identical to mice.

Therefore, these studies on echinacea should be conducted on humans. That way, there would be enough scientific evidence. Not just anecdotal.

You have cells that boost your immune system. One example of immune system cells are called “NK” cells. NK stands for Natural Killer. The same study above that proves echinacea benefits says,:

“Some of the contents of Echinacea are natural killer (NK) cell stimulants.” In other words, echinacea helps activate your cells that fight disease. The herb also seems to reduce tumors and viruses.

What kind of echinacea tincture should I use?

There are nine species of echinacea. The two primary kinds you’ll find in an echinacea supplement: echinacea purpurea and echinacea angustifolia. According to Diynatural.com, you can get both varieties in the U.S. However, “angustifolia” was what indigenous Americans used.

That doesn’t mean however, angustifolia is superior. As the authors of the Diynatural.com report point out, some herbalists think one variety is better than the other and vice versa.

All herbal preparations use various plant parts. Echinacea is no exception. There’s the root, the leaves, the stems, etc. Traditionally, echinacea root was used. However, you might find an echinacea tincture that includes other parts of the plant.

Want to make your own tincture? If so, it takes a long time for the DIY echinacea supplement to be ready. So if cold and flu season is fast approaching, buy one instead. For the highest potency tincture of echinacea, start in the spring with a leaf tincture, says Diynatural.com.  Then, when summer rolls around, add the flower. Come autumn, add the root to your DIY echinacea tincture.

The authors of the DIYNatureal.com report are herbalists. They claim compounds within echinacea help white blood cells navigate to an area of the body that’s being bombarded by an infection. White blood cells play a vital role in your immune function. For this reason, the authors don’t think it’s a good idea to use echinacea as a preventative remedy.

Not according to this study. The study is titled: The American Coneflower: a prophylactic role involving nonspecific immunity. American coneflower is another name for echinacea. And prophylactic means preventative. The aim of this study is to see if echinacea can strengthen immunity.

Healthy young adult mice were fed echinacea every day for a week. Now, remember those NK, natural killer cells? The ones that help keep you healthy? Well, after the seven days, the young adult mice had way more NK cells. In fact, 25 percent more than the other group of mice who were not fed echinacea.

Elderly mice also show higher NK levels after consuming echinacea for two weeks. “Indeed, this herb in the diet returned the numbers and function of NK cells in these elderly animals to the levels of the young adult,” conclude the researchers.

Perhaps a prudent strategy when using an echinacea tincture is this….

Take it every day for a couple weeks. Let those Natural Killer cells proliferate! Then, don’t take it for a while. You can also take it the last couple weeks of summer and fall. This might build up your immunity for the following season.

How to use echinacea tincture and how to make it

Don’t have access to echinacea in your area? No problem. You can use dried echinacea flowers and roots to make your own tincture. And don’t want to use alcohol? Make your echinacea tincture with glycerin.

Just be sure if you’re using fresh echinacea to remove all the stems and seeds.

According to the DIY website, A Delightful Home, if you want to use fresh herbs, boost the alcohol content. In fact, you’ll need to make your tincture with about 95% alcohol. Vodka is a popular alcohol to make a tincture with. All you need for  the tincture is a large mason or canning jar. Fill the jar about halfway with echinacea. Next, pour the vodka.

Fill the jar until there’s just a tiny bit of room left at the top. Seal the jar super tight. That’s it!

The echinacea will expand over the course of the next several weeks, says A Delightful Home.

The echinacea and solvent (the vodka or glycerin) should be kept at room temp. It’ll take a month to six weeks before it’s ready. Shake the jar every few days. This may help keep the therapeutic compounds active.

After the 4-6 weeks goes by, you’ll want to strain and discard the echinacea. Just like it’s best practice to store essential oils, in a dark glass bottle, do the same for your echinacea tincture.

How to use echinacea tincture

Again, the effectiveness of echinacea for colds is up for debate. However, people who swear by it recommend using it at the first sign of a cold.

A commonly-recommended dosage for a tincture is about a teaspoon a few time per day. (You’ll need a dropper to consume the tincture.) However, for optimal results, consult with an herbalist. 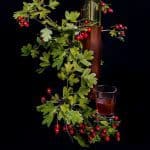