For those who love food, even truly healthy food, the idea of fasting can be off-putting.

Is intermittent fasting any different from the thousands of other fad and celebrity diets? Is it just another master juice cleanse or HCG diet?

And, is there any scientific research that proves the intermittent fasting meal plan can promote health?

A Beginner’s Guide to the Intermittent Fasting Meal Plan

A brief primer on intermittent fasting

Intermittent fasting, first of all, is not an extreme fast.

There are several different theories, styles and programs relating to intermittent fasting, such as alternate-day fasting, whole day fasting and time-restricted fasting.

Here’s a few examples of protocols for implement intermittent fasting:

What’s the purpose of intermittent fasting?

Proponents claim that intermittent fasting can help flush toxins out of the body. Especially if one has not eaten a healthy diet.

The intermittent fasting meal plan can starve the yeast overgrowth in the body. However, this occurs only if the person breaks the fast with healthy food such as bone broth soup or steamed vegetables, for example.

Many people believe that you must eat smaller meals more often in order to boost your metabolism. Proponents of intermittent fasting counter this claim.

It’s argued that a period of a brief fast can actually reset the metabolism, making it more effective.

Those who partake in intermittent fasting also claim that this method of eating can restore blood sugar to healthy, normal levels.

Is there any scientific validation to these claims?

There appears to be proven data. Caloric restriction has long been proven in studies to extend lifespans (although most of these studies have been done on non-humans).

But for most people, long-term fasting is not an option. After all, what’s the joy in living to 100 if you can’t eat good food?

Therefore, more researchers are studying the effects of intermittent fasting.

A study in Nutrition Reviews concluded alternate-day fasting trials of 3 to 12 weeks in duration appear to be effective at reducing body weight, body fat, total cholesterol, and triglycerides in normal-weight, overweight, and obese humans.

Fasting, in general has been shown to “improve biomarkers of disease, reduce oxidative stress and preserve learning and memory functioning,” says an article published in the Canadian Medical Association Journal (CMAJ).

One danger mentioned in the article, though, is that participants of the 5-2 program (intermittent fast two days a week) often feel that they can binge on whatever they want on the five days they are not fasting.

Bingeing, of course, negates any healthful benefits that may result from intermittent fasting.

Mattson is quoted as saying, if you don’t eat for 10–16 hours, your body will go to its fat stores for energy, and fatty acids called ketones will be released into the bloodstream.

Burning fat stores for energy has been shown to protect memory and learning functionality, says Mattson, as well as slow disease processes in the brain.

So does that mean you shouldn’t eat late at night?

You can still get the health benefits of intermittent fasting even if you have some cottage cheese or turkey slices for a midnight snack (or other non-insulin raising late-night snack).

But if you do have a bite at midnight, try not to eat again until at least 10 a.m.

Advocates of the intermittent fasting meal plan exuberantly celebrate the fact they can master their hunger response.

Thankfully, we live in an abundant society and don’t have to worry about starvation, which is true hunger.

Also, if your diet includes lots of sugars, it could be your body’s way of calling out for more sugar. Again, this is not true hunger.

Important to reiterate here is that when you break a fast, in order to boost health, you must eat healthy foods.

This means other than a modest amount of fructose (say, a handful of berries) or starch (sweet potato), you can’t eat anything that will spike your blood sugar level.

Otherwise, there’s really no point to intermittent fasting. It’s like drinking a Diet Coke while eating a Big Mac.

Want more information on the intermittent fasting diet plan? See this post for the top 5 benefits. 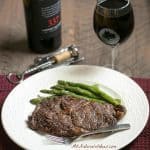 Carbs in Wine: How To Choose a Low Carb Wine