↑
You are here: Home / Natural Remedies / Proven Glutathione Benefits That You Need to Know

Detoxification is one of the primary glutathione benefits. So, make sure you have enough of it to help cleanse your body of toxins from the environment.

But there’s one more thing you should consider for your health. You may have heard about it recently. It’s called “glutathione.” (pronounced: ‘glute’—just like your glutes—‘uh’ ‘thigh’ ‘own’).

The amount of available glutathione you have in your body will largely determine if you live a long healthy life or fall victim to a chronic disease. But before you rush out to the natural health store to buy a supplement, keep in mind not all glutathione supplements will benefit your health.

A lot of the glutathione sold in health stores will be a waste of your money. Or worse, they can harm your health. So, do your research first.

It’s challenging enough worrying about your health, remembering to take all your supplements (and knowing which ones to take) and leading a low carb lifestyle. And now you’re being told to worry about glutathione. But that’s for good reason.

You should be aware about how your health relates to the amount of available glutathione you have in your cells. There have been tens of thousands of research studies on glutathione benefits. In terms of health, researchers see a pattern of low levels in people who have chronic disease.

There’s some good news and bad news about glutathione. First, the good news: your body already produces it. No worrying about having to take yet another supplement, right? Well, not exactly.

Here’s the bad news: unless you live in a bubble sealed off from car exhaust and xenoestrogens,and other toxic chemicals, your body can’t produce enough glutathione.

And just as your liver needs to be healthy enough to detoxify 21st century pollutants, your trillions of cells all need enough glutathione to keep up the detox demand. This is why glutathione is known as the body’s “master antioxidant.”

Some people think all free radicals are bad and that your body shouldn’t have any. But that’s not correct. A healthy immune system keeps itself busy with an all-day killer workout.

Your body, when healthy, keeps oxidation in check. And this is where glutathione’s primary function and primarily health benefit comes in.

It’s the ultimate recycling system for all the antioxidants in your bloodstream and cells. It helps keep vitamins like C and E in a so-called ‘reduced state.’

When glutathione is able to do its job of recycling other antioxidants, free radicals are mopped up and neutralized. They are hastily shown the exit door through the elimination system.

Glutathione in a healthy body regenerates hydrogen in the cells. It unselfishly donates hydrogen to an oxygen-hydrogen molecule.

When you add another hydrogen molecule to oxygen-hydrogen, what do you get? That’s right, water! By sparing that extra hydrogen molecule, glutathione allows your other antioxidants from being used up. This is what “reduced state” means.

But there are so many tempting unhealthy foods and tens of thousands of toxic chemicals in our environment. Because of this, as much as half the population could be deficient in glutathione.

That’s not good, considering the benefits of glutathione, which, in addition to recycling your body’s other antioxidants, include:

The highest levels of glutamine tend to occur in young, healthy people (although as younger people are getting less exercise and spending more time on electronic devices, that may be changing).

So what can you do to keep up your body’s glutathione levels?

You have three options: eat foods that encourage glutathione production, exercise (but not too much) and take glutathione supplements.

A better option for raising your body’s available levels to get the glutathione benefits may be through a liposomal glutathione supplement. A liposome is a microscopic ball of fat. The fat on the outside of it hides a poorly absorbed nutrient—like glutathione—inside.

However, not all liposomal glutathione supplements are effective. Wellwise.org says to that liposomes should not contain more than 25% glutathione and be between 50 to 200 nanometers in size.

Obviously, the biochemistry of how liposomal glutathione (and glutathione, in general) works is far more complex. (Besides, reading a lecture about the ins and outs of advanced biochemistry would probably give you a big headache.)

Mmmm, sulfur! Doesn’t sound appetizing, does it? When one thinks sulfur, the first thing that probably comes to mind is rotten egg smell. But foods that contain sulfur don’t necessarily reek of it.

Cruciferous veggies seem to be good for just about everything. And this may be true of increasing your body’s circulating glutathione. They contain lots of sulfur.

Some other foods that may help boost levels in the cells to reap glutathione benefits include:

Raw whey is high in the amino acid, cysteine. Cysteine is one of the three amino acids that form glutathione.

Cysteine is relatively hard to obtain in a modern human diet. This is especially true of foods that provide bonded cysteine.

Again, at the risk of getting too seeped into biochemistry, here’s the important take-away: bonded cysteine can help glutathione enter all your trillions of human cells.

The only other great source of bonded cysteine besides raw whey protein powder: human breast milk. That’s why whey is the way to go, as long as it’s raw!

So your thinking of upping your levels now that you know the glutathione benefits. But, are there any negative side effects to glutathione supplementation?

The reported negative side effects include diarrhea/loose stools, weight gain, fever, flushing, rash, and increased irritability. Also, fittingly enough, if you take a glutathione supplement and have poor gut health, you may produce flatulence that smells like, well, rotten eggs. (Blame it on the sulfur!)

As mentioned, oral glutathione supplements are most likely a waste of money. That’s because they don’t get absorbed into the bloodstream.

One of the precursors to glutamine, N-Acetyl Cysteine (NAC), may actually help raise your cellular available glutamine. You can safely take up to a couple grams a day of NAC for glutathione benefits.

Check with a medical professional to get your available glutathione levels tested to confirm if you should supplement with glutathione or liposomal glutathione.

Some medical doctors offer injections of glutathione. But this option is for people who already have a chronic disease.

If your goal is general wellness and disease prevention, don’t blindly take supplements without first knowing your baseline glutathione levels. 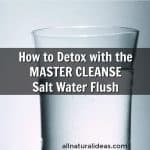 How to Detox with the Master Cleanse Salt Water Flush

Detoxing Your Body – How to Detox and When to Do It