Trying to cut down on sugar but satisfy your sweet tooth? Erythritol has become one of the most popular sweeteners in recent years. Is it natural or artificial? Safe or dangerous? Super sweet or not as sugary tasting as the regular white stuff? Learn more about this alternative to sucrose….

By now, you’re probably aware that artificial sweeteners are really bad for you. For instance, high fructose corn syrup (HFCS) interferes with the communication between your hunger hormones and your brain.

Your brain doesn’t get the signal to stop eating because of HFCS. Which is why people who eat processed food eat way more than they should. Even though many artificial sugars contain zero calories, the risks of using them outweigh the benefits.

Still, the demand for non-caloric sweeteners is high. The rates of obesity and diabetes show no signs of reversing. As a result of chronic diseases caused by poor diet, sugar alcohols have increased in popularity.

Relatively new to the market is a sugar alcohol (aka “polyols”) called erythritol. You may be familiar with other polyols such as xylitol and sorbitol.

Sugar alcohols aren’t soaked with rum, gin or tequila. Rather, they’re white, water-soluble granules. They can occur naturally or be produced industrially from sugars.

Typically, they thicken and, of course, sweeten food.

But what makes erythritol unique among polyols?

It’s an ultra-low-calorie natural sweetener, made by fermenting a yeast that eats the sugar from corn or wheat.

It hardly contains any calories per gram. In fact, there’s less than a quarter of one calorie.

Because it hardly contains calories and is only 70% as sweet as regular sugar, it’s considered ideal for people with diabetes and obesity.

Despite the fact that it was first isolated in 1852, it would be another 150 years until it was marketed as a natural sweetener. (In 1990, Japan introduced it.)

You can find it a variety of goods, such as:

Like other polyols, erythritol is naturally-occurring in certain fruits and vegetables such as grapes and mushrooms.

Fermented foods like soy sauce also contain minute amounts of it. In 1950, researchers discovered that traces of it were left over as a result of yeast fermentation  in the residue of Cuban blackstrap molasses.

This discovery fueled hope that erythritol could be mass produced.

However, it has proven to be expensive to produce in comparison to other sweeteners. This is why you’re not as likely to find it as you would other natural sweetener alternatives such as stevia.

Nonetheless, it is sold commercially in stores and online.

Yes, it is. Not all polyols are natural. Some are synthetic and present in many processed foods.

Erythritol is not considered an artificial sweetener. Nor is it a man-made sugar alcohol; it’s produced by natural means: the fermentation of corn starch.

If you like the fact that stevia is natural but don’t like it’s bitter aftertaste, then you’ll appreciate erythritol. That’s because it has no aftertaste.

As mentioned, this alternative sweetener is ultra low in calories. Thus, it’s safe for those watching their blood sugar levels.

Other positives about it include:

In comparison to other popular sweeteners, erythritol has the lowest score on the glycemic index. Only mannitol, another sugar alcohol, and stevia have a score of zero on the GI.

Other polyols do have an effect on insulin. Xylitol scores 13 on the GI; Sorbitol: 9; Maltitol: 35; Lactitol (made from whey): 6.

If you’re worried about insulin production, any of these polyols fare better than sucrose (cane sugar), which has a GI score of 65.

Aside from its zero effect on blood sugar, there are other benefits of this sweetener:

A golden rule of nutrition is that if you can’t pronounce the name of an ingredient, it’s not good for you. Erythritol seems to be an exception.

So if you see it listed as an ingredient in powders, supplements (tablet coating), lozenges, chewing gum or syrup, don’t think it’s a harmful ingredient. (Some of the other ingredients may very well be, but not this sweetener.)

Are There Side Effects?

There is some conflicting information about whether this sugar alcohol is safe.

A couple of research studies have shown it to be harmful to rats and fruit flies. But what about humans? Well, in order for it to be really harmful, you’d likely have to ingest a ton of it.

Nonetheless, sugar alcohols do not absorb in the human intestinal tract. Most of it flushes down the toilet via urine. The good news is the 10% or so that stays in the body does not appear to ferment in the colon.

Fermentation in the colon can lead to bad gas and possibly other digestive upset.

This seems to be the most common side effect of consuming erythritol. However, most people will likely be able to eat it without experiencing side effects.

Curiously, however, in one study, researchers concluded it led to weight gain in male freshmen college students.

Did the researchers factor beer consumption into the equation isn’t clear.

In other words, don’t put too much stock in studies claiming any erythritol dangers. It’s safe for virtually everybody.

Because stevia is not a polyol, it may not cause digestive upset as often as sugar alcohols. However, as noted above, it has a strong, bitter aftertaste. Many people describe it as metallic.

Another turnoff about stevia is that it tastes very sweet. Depending on what stevia compound a product contains, it can taste up to 400 times sweeter than regular table sugar.

Remember, erythritol is almost as sweet as table sugar (70% or so as sweet.)

Yes. If you’re calculating net grams of carbs and love cookies, this sweetener is your best friend.

Some keto cooks combine it with stevia (the brand Natvia is combination of both sweeteners). This is especially true in recipes that require moist texture like keto cheesecake.

If you’re in the supermarket, look for a brand called Swerve. It doesn’t contain stevia.

And, of course, you can shop online for it.

Erythritol is almost calorie-free. It has no effect on insulin and blood sugar. And while you can’t metabolize it, it doesn’t ferment in the colon. Thus, it causes few digestive side effects.

This natural sweetener may even be good for your health. Erythritol fights free radical damage and contains antioxidants.

Want to learn more about specific sweetener alternatives? You may want to check out the following:

MONK FRUIT EXTRACT: ZERO CALORIES, BUT WORTH THE COST?

Erythritol as sweetener—wherefrom and whereto?

Chronic toxicity and carcinogenicity study of erythritol in rats. 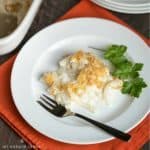