↑
You are here: Home / Gardening / Wheatgrass Seeds: Healthy and Affordable to Grow

Wheatgrass seeds offer many health benefits. You can easily sprout and turn the seeds into wheatgrass shots. Learning how to grow your own is easy and will save you lots of money.

Today, bone broth, golden milk and turmeric shots are trendy health elixirs. But since at least the 60’s, when yoga and other natural healing methods became popular (at least with hippies of the Flower Power generation), wheatgrass has been used for a variety of health benefits.

However, step into any trendy juice bar, order a wheatgrass shot and you’ll pay at least a buck or two. While that might not sound expensive, consider that wheatgrass drinks are usually by the ounce. That’s roughly the equivalent of half a shot of hard liquor. Of course, wheatgrass is much healthier than booze. But even stacked up against stiff liquor, wheatgrass is expensive.

It’s one thing to have a caffeine addiction and spend $5 a day on coffee drinks. But if you’re also spending a couple bucks or more on wheatgrass, the cost can take out a significant dent of your spending money.

In light of this, learning how to grow your own by purchasing wheatgrass seeds is becoming more popular. It’s fairly easy to turn the seeds into the drinkable green healthy juice. You don’t need to have a green thumb in order to turn them into wheatgrass juice. Also, you don’t even need to have that much space or even a garden for that matter.

To make your own wheatgrass and save money, here’s what you need:

As you’ll see, germinating the seeds takes little time and skill. But before diving into how to grow your own wheatgrass, let’s take a look at some of the health benefits of wheatgrass….

Wheatgrass seeds: why it’s worth growing your own

According to this study, there are several health benefits of wheatgrass. Wheatgrass is the young grass of a common wheat plant. If you come across seeds bearing the name “Triticum aestivum,” that’s the same thing as most of the wheatgrass sold in health juice bars. Triticum aestivum is the botanical name for wheatgrass.

What makes wheatgrass the color of, well, lush green grass is chlorophyll. If you can remember way back to elementary school, perhaps you remember learning about photosynthesis. Photosynthesis is the process by which plants use sunlight for energy. Chlorophyll is the green pigment in all green plants. And it’s this pigment that absorbs sunlight and transforms it into chemical energy.

Chlorophyll sounds great for plants. But does it benefit humans, too? Yes, in a lot of ways. It supports blood iron levels. It also can reduce inflammation, fight fungus, protect your cells against premature aging and heals wounds.

Moreover, chlorophyll can suppress appetite. That’s a huge benefit for those that are trying to lose weight, of course. In addition, wheatgrass, because of chlorophyll, can detoxify the blood. That means that if you have been exposed to environmental pollution, wheatgrass may help push the toxins from your blood into your elimination system.

Not all wheatgrass is equal. The beneficial medicinal compounds in wheatgrass depend on the growing conditions. That’s why it’s recommended you buy organic soil for your seeds. Also, there are several different types of wheatgrass seeds.

Some wheatgrass experts who have been growing their own have their personal favorite variety of seeds. One example is red hard winter wheat. Spelt grain is another type of wheatgrass seed. Kamut is another ancient grain of the wheat family. Whatever variety you choose, growing experts recommend organic wheatgrass seeds that are high in protein and low in moisture.

One more major wheatgrass benefit: it can help people with diabetes. That’s because some of the compounds in it act like insulin, the hormone that controls blood sugar. This study shows that wheatgrass may help reduce insulin resistance.

How much do wheatgrass seeds cost?

If you’re sold on the benefits of wheatgrass and want to grow your own instead of paying for it by the ounce, how much does it cost? Well, if you want to start out small, just buy a pound of it. That should be enough to make your first batch of wheatgrass juice. There are a few different ways to grow wheatgrass.

But if you want to buy even larger quantities of wheatgrass seed and really save a lot of money, stay tuned…. You’ll learn how much (or, more accurately, how little) buying in bulk costs.

How to grow wheatgrass seeds

Without doubt, there are different ways to grow wheatgrass seeds. A well-known health and lifestyle retreat center in Florida called the Hippocrates Institute includes wheatgrass in detox programs. Moreover, the Institute teaches people how to grow their own. Their method uses non-GMO, organic red, hard winter seeds.

Germination of the seeds is the first step. You can use any sprouting vessel to germinate them. The Institute prefers using Mason jars. The lids of the Mason jars should be well ventilated.

Amazon.com and garden stores sell sprouting kits with sprouting toppers. Sprouting toppers are the lids of the Mason jar. But instead of a regular Mason jar lid that prevents the drinkable wheatgrass juice from spilling, the sprouting topper has lots of holes to assist in the germination process.

You’ll need about one cup of the red hard winter wheatgrass seeds (also called berries). Place the seeds in the Mason jar. Next, soak them for eight hours. Be conscious of the type and temperature of the water you use.

Only use purified, filtered water that’s room temperature. Place the sprouting lid on the Mason jar. Then, drain the lid by turning jar upside down. Place the jar in a drying dish rack. Tilt the jar at a 45-degree degree angle in the dish rack, just as you would a wine glass.

Then, you’ll want to rinse the seeds times every 12 hours. After this, your wheatgrass seeds are ready to plant. You’ll know the seeds are ready if you see white spots. Those spots are roots that are starting to sprout.

How to grow wheatgrass seeds (cont’d)

Next, you’ll want to make sure you have two 17” x 17” planting trays handy. Set one planting tray aside. (Make sure the tray has holes in it so the soil you’ll soon add can drain properly.) To the planting tray, add about a half-inch of organic potting mix.

Evenly distribute the potting mix in the tray. The important thing when placing the potting mix is to make sure it’s not clumpy. The Institute suggests lightly compressing the soil by taking the second planting tray, which will be empty, and placing it on top of the one with the germinated wheatgrass seeds and potting mix. Using your fingers, apply gentle pressure to the mix to evenly spread the seeds throughout the tray. Then, rotate the tray 90 degrees and once more evenly spread the seeds with gentle pressure.

Like an expertly manicured lawn at a baseball stadium, this method creates a nice even pattern. Next, you’ll want to moisten the potting soil with a spray bottle. No need to super soak the seeds. You’re just wanting to get the surface of the soil moist. Now, the wheatgrass seeds, which have now expanded from a cup to about a a cup and a half), will fill the tray.

Your next step is to evenly spread the soil lightly across the tray. Mist once again, more heavily this time. Cover the tray with the other empty tray. The Hippocrates Institute recommends watering twice a day for a week. And after the third day is complete, you no longer need to cover the tray. But you’ll want to continue watering. To do this, use a sprout lid. Simply pour water into the sprout lid and water evenly. For best results, hold the lid right over the soil and water from side to side.

If all goes well, you’ll notice after day four, the roots have made their way into the bottom of the tray. Protected by the moisture of the soil, the roots are ready to harvest after the wheatgrass plant graduates from baby to adult. This occurs when a second leaf appears on the stem. According to the Institute, this is the best time to consume wheatgrass.

It’s at this time that the plant is the most nutritious and sweetest tasting. To harvest the wheatgrass, simply cut it with a knife. Make the cut right above the soil line. For best growing conditions, Hippocrates Institute recommends growing wheatgrass indoors, in indirect sunlight. Make sure the room is cool.

What many online wheatgrass growing tutorials fail to mention, however, is that after the grass is ready to be harvested, it’s not quite ready to drink. To transform wheatgrass into a shot, you’ll need a grinder. Stainless steel models run from $100 to a few hundred bucks. You’ll need to clean your juicer after every use. If that’s a non-starter for you, then don’t consider growing wheatgrass seeds. However, if you don’t mind the clean-up, new models of juicers are far more user-friendly than juice grinders of the past.

How long does it take to grow wheatgrass?

The Hippocrates Institute method takes exactly one week. But, in less than ideal growing conditions, it might take up to a dozen days. However, the seeds actually start to germinate in as little as two days. This is true if the seeds are sprouted in pots or trays. The reason the Hippocrates Institute recommends indoor growing is that it takes longer for wheatgrass to mature. Indoor cultivation using sprouting trays or even pots ensures steady moisture levels. If you do decide to grow wheatgrass seeds outdoors, expect it to take up to a few weeks to cultivate.

Make sure that pots or potting trays are completely clean before you grow new seeds. Fungus can easily grow in wheatgrass containers. Therefore, disinfect all pots and tools before use by soaking them in a solution of one part bleach and nine parts water for 30 minutes. Also disinfect cutting shears and knives.

Ready to take the plunge? If you really want to grow your own wheatgrass seeds, buy them in bulk. For example, Montana Flour & Grains offers a 50 pound bag of organic hard red winter wheat for only $25. Country Life Natural Foods also sells a 50 lb. bag for about the same price. If you follow the instructions above on how to grow wheatgrass, most companies claim their seeds have a 99% or better sprouting rate. 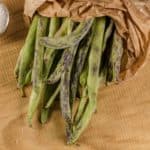 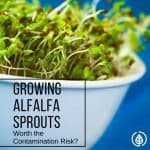 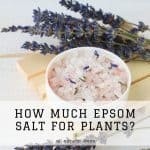 How Much Epsom Salt for Plants to Get Tasty Veggies? 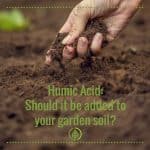 Benefits of Adding Humic Acid to Soil for Plants